Recently I’ve been thinking a lot about adult friendships. Why the adults I know have so few friends, particularly if they are in a relationship or have kids. Why there is such a gap between their social network size and the number of people they actually consider confidants. Why there are so many well-developed tools for finding jobs and partners, but not friendship. My search for answers began by diving into academic research on social networks.

To provide some context, a global social network is often subdivided into several circles when discussed academically: acquaintances, co-workers, friendship, personal, and family. It’s well documented that social networks and the emotional support that they provide are as valuable as sleep, eating well and exercise for long term health and wellness. The personal network is the subset of the global network that provides this essential support. Practically speaking, these are the people you reach out to when you have important news to share, serious decisions to make, or need to ask for help. Needless to say, these are the relationships you want to build and maintain as an adult. Above and beyond individual benefits, strong friendships have a huge positive impact on communities as a whole.

Surprisingly, little research has been done about the strength of personal networks of adults after they graduate from college and before they retire. Fewer studies look at this issue since the world became flat (or spiky, depending on your take) and digital social networks became the norm. According to the research I was able to dig up, an individual’s personal network decreases by 1 person per decade on average throughout adulthood. It has been suggested that adults now have almost 50% turnover in that personal network every 7 years. Though still debated, studies have also indicated a significant decrease in size of Americans’ personal networks over the last 20 years, The most common reasons for these decreases and fluctuations are marriage, parenthood, divorce and relocation. Relocation seems to have the strongest effect on the size of an adult’s personal network and is increasingly frequent in today’s society.

For some reason, there has been little commentary on the state of adult friendships in the media. David Brooks wrote an op-ed article about cultivating friendships last Fall. Brain Pickings recently published an eloquent piece about the rare gift of friendship. Sherry Turkle, a thought leader on the impact of technology on human interaction, has spoken often about today’s weak support networks. While there are many posts with step by step guidelines for how to make friends, there is little discussion about why these trends exist and how society should address them. 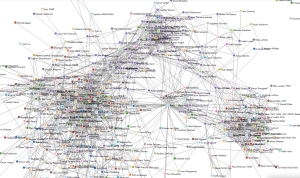 After exploring these readings, I was inspired to map my social network. There is a handy tool called Socilab that can help you do this using your LinkedIn connections. Each person in your network becomes a node and their relationships to each other are the links between nodes. It was easy to immediately identify the different clusters that make up a significant portion of my network: Hong Kong (where I have lived for the last 7 years), Industrial Design community (my trained profession) and Georgia Tech (where I attended university). You can also see the centrality and closeness of key people in your network, among other characteristics. In my case, there are 3 people who have the most connections among my network, none of whom are within my personal network now. Each of them played an important role at different stages of my life. Of course, this visualisation focuses more on my professional network and does not directly reflect my personal network nor how it has changed over time. Unfortunately, it seems that it is not possible to map your Facebook social network at the moment. If anyone finds a tool that works, please share in the comments.

In order to better understand my personal network, I made a list of the people whom I count among my close friends today. For good measure, I also attempted to create lists for both 2008 and 2001 (looking back every 7 years to the beginning of adulthood). The turnover in my personal network was greater than 75% every 7 years, during which I experienced two relocations, marriage and divorce. Afterwards, I used a mind map to visualise how I met each of those people. While you often hear, “If you want to make friends, join a club”, I can only trace one of my close friends back to such a beginning. Even the connections between my close friends and my wider friend network are loose at best.

What’s your take? I’d love to know if these observations ring true. Try out these simple exercises and see what you uncover. If you’re aware of an ongoing discussion around adult friendship happening online or off, I’d love to hear about it!

The only picture I have of me with a pen in my hand, thanks to Megan Reeves Photography.